This is the best one so far. I like everything about this except for the title. The title is dumb.

This is the book where Ty finally dies! Unexpectedly, I ended up feeling a little bad for him, since he displays an endearing childlike credulity in this one.

The back cover blurb is awesome in its ridiculousness: Ty Sullivan thinks he’s so hot. Especially since he’s seeing three girls–all at the same time. And when Ty gets a valentine from the mysterious Amy, he decides to go out with her, too. But Amy isn’t like the other girls…she’s dead. 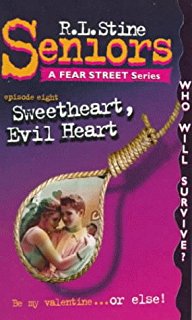 The Plot (Brief Version): Trisha Conrad, having failed to kill Ty when she was possessed, manages to get him killed for real this time around.

The Plot (Extended Version): Ty is officially dating Phoebe, since her parents gave her permission to date at the end of the last book. He’s also sneaking around with Trisha Conrad, who is actually dating the extremely jealous, wrong-side-of-the-tracks bad boy Gary Fresno. And finally he’s seeing Marla Newman. He’s told Marla and Trisha he’s about to break up with Phoebe, and assumes neither of them know about each other, and Phoebe doesn’t know about either of them.

Honestly it would be more amazing if this DIDN’T get him killed.

He’s up in his attic with Marla (because dating in Shadyside involves attics, I guess), and she bumps into an old desk and an antique Valentine falls to the floor. It’s addressed to Tyler Sullivan. If you can’t see where this is going you may be as sweetly gullible as poor Ty.

I’VE BEEN WAITING SO LONG FOR YOU. I ACHE FOR YOUR KISS. WRITE TO ME, OR I WILL DIE. BRING YOUR LETTER TO THE SHADYSIDE CEMETERY, AND LEAVE IT UNDER THE OLD ELM TREE NEAR THE FEAR FAMILY TOMBSTONES.

Ty assumes “some other girl” is interested in him, and flat-out lies to Marla that it must have belonged to his grandfather, whose desk she just backed into. Ty is an idiot.

He also thinks Amy sounds “pretty hot,” which is an incredibly strange conclusion to come to based on a handwritten note.

Marla, Phoebe, and Trisha all expect him to ask them to the Valentine’s Day dance. His friends Mickey Myers and Kenny Klein are placing bets on which one he’ll go with, when they’re not tossing paper balls around in the corridor and slamming into Justin Thompson, who Ty thinks of as “one of Shadyside High’s main dweebs.” Ty and his friends are all jerks.

Meanwhile Gary spots Trisha out driving with Ty, and tells Ty he wants him dead.

Ty gets another note from Amy telling him she has a TERRIBLE JEALOUS TEMPER. Even if she’s not a ghost, Ty, you shouldn’t be writing back to her: those all-caps notes are creepy.

But he is writing back to her, because Ty is an idiot. That would also be the reason he’s still stringing along three girls.

He gets a static-y phone call (on a landline; how quaint) from Amy while Phoebe is at his house.

Gary gives Trisha a ride home, driving like a maniac and convincing her he’s dangerous. It’s not a good idea to accept rides home from people who’re angry at you, Trisha.

Ty is increasingly (weirdly) infatuated with a girl he thinks is dead. She sends him a faded photograph of a girl in a long cape and bonnet, so he still doesn’t really know what she looks like.

Trisha also gets a Valentine from Amy, warning her away from Ty. We see that scene from Trisha’s perspective, and it’s kind of cheating that she only thinks “I’ll have to show this to Ty” without further explanation. But she has one of her visions, which interrupts her chain of thought to show her a dead boy she can’t identify, so I guess I’ll let it slide.

Phoebe and Marla also get threatening notes; Ty has his tires slashed and a dead rabbit pinned inside his car with a knife; Marla interrupts his at-home study date with Phoebe (oops) because a girl jumped her and beat her up; Gary continues to be threatening, but can’t have done the rabbit thing because he was working on his beat-up car. Got all that? Basically, Ty’s dead girlfriend is turning stalkerish.

So he breaks up with her, via note left in tree. It’s not as bad as being dumped via text message, but it’s close. Naturally her next note is an angry all-caps threat to kill his three girlfriends.

In one of my favourite scenes, Ty tries to get a date for the Valentine’s Day dance, but Trisha is going with Gary, Phoebe claims to have sprained her ankle, and Marla is visiting her grandmother.

Ty being Ty, he assumes they’re just turning him down out of fear of Amy.

So he goes to the party alone, feeling humiliated, and he sees Amy.

One minute she’s on the ground floor, and impossibly fast she’s up on the balcony, and its incredibly obvious what’s happening but I still love it.

When he pulls the bonnet off an “Amy,” it’s Phoebe, and then Trisha and Marla show up ALSO dressed as Amy, and he finally realizes they’ve been revenge-pranking him all along.

Only after he leaves them behind, he sees Amy yet again, and follows her outside.

Trisha gets a creepy feeling about this, and all three girls are feeling improbably guilty, so they go outside and find Ty’s corpse. He’s been run over and killed.

The girls are questioned by police but released. Trisha has a vision of a red car running Ty down.

At school Gary fights with her over Ty, then offers her a ride home in a shiny red car with a bump on the front fender. She panics and runs, and ends up in the Shadyside Memorial Cemetery. Someone grabs her!

He insists on walking Trisha home, and along the way confesses he LIKES her, and that’s why he had to kill Ty. Wait, so the final “Amy” was Justin in a dress?

Trisha gets away from him but in the struggle he falls and hits his head on a gravestone and dies.

(You’d think the police would be REALLY interested in Trisha by now, but no. I guess having wrongly accused her of killing Ty they don’t even want to ask how a second guy died while in her company.)

Gary leaves a sweet, apologetic Valentine for her. He’s riding a bike now, and explains he no longer felt comfortable driving the car he borrowed FROM JUSTIN now that he knows Ty was killed with it.

Even Twistier: Phoebe and Trisha cut through the cemetery and see the police tape surrounding the grave where Justin died. This time Trisha reads the headstone: